On June 26th, students in the Vファーレン・ワクワク “V-Varen/WakuWaku” and 地域活性化策“Regional Revitalization” Community Service Learning (CSL) program joined together at CGU to take part in a “Saruku” walking tour of Isahaya. This was a good opportunity for students to learn about the rich local history that surrounds the university campus.

The Nagasaki Kaido road was a 228-kilometer long road traversing Kyushu that played a crucial role in the sugar trade during the Edo Period (1603-1868) and came to be known as the “Sugar Road”. In early days, dignitaries would travel these roads as tributes were paid to Edo. Nagasaki Kaido became an area of commerce as tea shops and inns would dot the route.

Isahaya Park area and the spectacles bridge were a highlight of the walking tour. Students were able to enjoy Azalea Park and viewing the ruins of Takashiro or Isahaya castle which was built during the Taisho period. The “Spectacles Bridge” or “Megane-bashi” is a double arch stone bridge which spans a pond in Azalea Park. The bridge is twice the size of the famous Spectacles Bridge in Nagasaki city. The bridge, a designated cultural asset, was originally built over the Honmyo river in 1839, but relocated to the park after the flood of 1957. The Isahaya Big Flood which tragically stuck on July 25 in 1957 (Showa 32) 64 years ago, claimed the lives of 682 local residents. 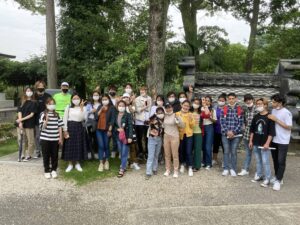 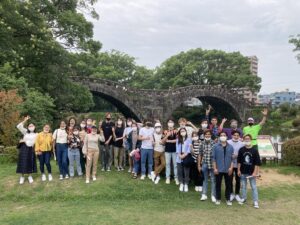 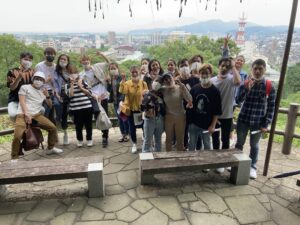